By Toshita Barve October 16, 2020
Beware of the spoilers to Fallen that lurk beyond this message... 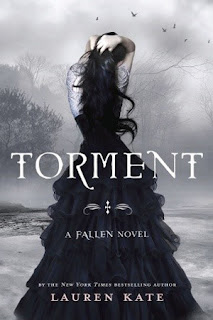 Hell on Earth. That is what Luce feels when she has to stay away from her boyfriend, Daniel, who happens to be a fallen angel. Even though it took the two of them an eternity to find each other, he still says that he has to go away from her. Daniel wants to keep her safe from the Outcasts, a group of immortals who want to kill Luce. In order to keep her safe, Daniel drops Luce off at Shoreline, a school for Nephilim, the children of fallen angels and humans. There on the California coastline, Luce learns about Shadows and how to use them. As she learns a little more about her previous lives she realizes that Daniel may not be telling her the truth. He is definitely hiding something and that may change everything that Luce knows about their relationship.
This is not my first time reading Torment, however I read it quite a few years ago and could not remember much from it. The main thing that I recalled from this book was the ending and it was a hazy recollection at that. It honestly felt like I was reading this book for the first, however as I continued to read it I did start to remember some small details. I never had a moment where I suddenly remembered everything.
The thing that I liked the most about this book was Luce’s character development. In the previous book, Luce was more two dimensional. In Fallen, she was slightly boring because she was obsessed with Daniel and struggling with trauma. She didn’t have much depth to her because her character was literally defined by her obsession with Daniel. But in this book she really grew into herself as a person and a character. Luce became quite independent in this book which is something that I really enjoyed reading. I love characters that are independent and I especially love seeing characters grow into their own strength and gaining the self assurance that leads to independence. I would say it is my favorite character arc apart from a well done redemption arc. Additionally, it was nice to see these sides of Daniel and Cam that weren’t showcased in the previous book. In general, all of the characters went through development and became more rounded but Luce's character development was the most noticeable and the most needed.
The plot of this book was great! I loved it. It was fast enough to keep my interest but also slowed down enough to answer the unanswered questions of the previous book. I’m glad that Lauren Kate didn’t let the questions just build up from Fallen and Torment because that would have been a lot of confusion much like Strange Angels and Betrayals. The plot was great because it showcased a lot of Luce’s development. The way Luce acted at the beginning of the book was completely different and it was easy to track which events in the book had led her to change her viewpoint and thus become a different person. There were a couple of “oh the plot thickens” moments but I was able to predict them before they happened. I don’t know if I have ever explained what “oh the plot thickens” moments are, so they are moments when the story suddenly gets interesting because a new piece of information is revealed or something happens. I wouldn’t classify them as twists because they are not huge moments that change the context of everything that we know but they are the small unexpected moments that make you want to read the book faster. Going back to the book, I was able to predict these moments but due to the fact that I have read this book before, I have no idea if this book is actually predictable or if I was just subconsciously remembering things as I was reading.
The ending to this book was totally unexpected. Much like the ending to Jealousy, this ending did stick in my head and brought me back to this series because I would occasionally remember it and wonder what happened. Even though the ending was unexpected, I think it fit in with everything that happened in this book. Everyone involved in the ending was perfectly in character which may seem like that doesn’t fit in with the fact that the ending was unexpected. But it does because even though the characters chose to do certain things (all of which were in character), it doesn’t mean that everything actually goes their way. Also with an ending like that I can’t wait to read the next book.
Overall I’d give this book 3 stars, which is exactly what I gave it when I first read it. As I have mentioned, the plot and character development were wonderful and I really enjoyed them. Even the ending was great but the fact that I was able to predict most of the little moments stopped me from giving this book more stars. I wouldn’t say that I could have done without this book because it moves the story forward but it didn’t blow my mind nor was it terrible. Torment is just an average book I’d say. Off I go to read Passion!