Into the Fairy Forest (Pan Chronicles #1) by: J. M. Stephen

By Toshita Barve November 20, 2020
This review was requested by the author. 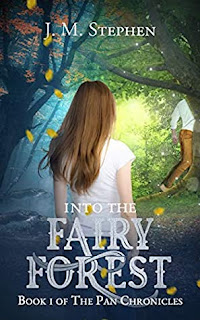 Pippa Gardener would tell you that she’s just a normal teenager, except weird things keep happening to her. She can’t use her cell phone to save her life, her mother dies in a mysterious fire, another fire seems to come after her, her friend almost gets eaten up by the ground, and she meets the most beautiful boy she has even seen, Pan. Pan brings her into a world like no other, and all of a sudden, Pippa is attending fairy weddings, running around with satyrs, trying to find the truth about what is going on, and battling a centaur…? Even though Pan is the one that brought her into this mess, there is nothing that Pippa wants more than to run right into his arms.

When I was approached by J.M. Stephen to read Into the Fairy Forest, I was excited. I had previously read Nod and I had enjoyed it even though it wasn’t the kind of book that I would have picked up by myself. When I read the blurb for this book, I realized this one was up my alley and since I had already had a good experience with J. M. Stephen, I was looking forward to reading it. Into the Fairy Forest did not disappoint me. I thought that I would enjoy reading it and I did. There are a couple of things that I wish were different but they didn’t diminish my reading experience.

My favorite thing about this book is the world building. As an avid reader of the Percy Jackson series and due to a middle school obsession with Greek mythology (mostly because of the Percy Jackson series), I had a lot of background knowledge about things that were mentioned in this book. I mean the name of the series is literally the Pan Chronicles, come on. So I was totally expecting the story to lean heavily towards Greek mythology like Percy Jackson does but that wasn’t the case at all. The world that is built in this book is so unique. It is unlike any other book that I have read. It does call on Greek mythology but it also takes inspiration from other legends such as the legend of King Arthur. I loved seeing the almost easter eggs or references to other popular stories and seeing how they paid homage to those stories but also took on their own roles in this book. To put it into an analogy, the same ingredients were used to create a brand new dish.

A close second to world building itself was the plot. Into the Fairy Forest is packed with action and I mean packed. In all honesty, everything that happened in this book could have been split into two whole books. But even with so much content in the book itself, I never felt overwhelmed by how much was happening nor did I ever feel that the book was dragging. The balance between action and exposition was struck really well, which indicates a well written book. The beginning was a little exposition heavy for my taste but it didn’t last for too long, probably a chapter or two and then the pace of the story picked up.

While the pacing of the plot and the balance between action and exposition was really good, I thought that the overall arc of the story was predictable. Most of the things that happened were foreshadowed and I was able to pick up on the clues and put the pieces together to figure out most of the reveals in the story. I wish there had been a couple of twists in the story just to shake things up a little but I enjoyed reading it even though I was able to predict most of it. The piece that I did not predict was the ending. I did not expect the resolution of the conflict to play out the way that it did. It wasn’t really a twist because it didn’t come out of left field but it was unexpected. Due to the ending of this book, I am looking forward to reading the next book in the series.

I am a little conflicted about the characters in this book. On one hand, they were wonderful and unique. Each of them had a role to play and they fit in well with the story. On the other hand, there was something missing. I can not put my finger on it, but there was something that stopped me from feeling like the characters were real, three-dimensional people. All of them felt a little flat to me. I want to say that they were lacking emotional depth and evolution but that’s not it because there was emotional depth in the characters and their emotions did change. I am having trouble pinpointing exactly what was lacking in the characters but every single character felt a little two-dimensional and flat to me.

Since we are talking about the characters, let’s also talk about their relationships. I enjoyed seeing the ways in which the characters interacted with each other, especially the ones that had no previous relationships and had come together due to the circumstances that they were going through. However, one thing that I would have liked to see was more description about their interactions. Pippa and her aunt obviously need to navigate a new relationship but I didn’t get to read the path that they took to get there. The only things that I got were checkpoints as in here they are unsure of how to behave with each other, and here they are getting into a routine. But what about the middle stage where they have a couple of awkward interactions or a hard conversation? I missed those in between moments. I wanted to see how two characters went from being mere acquaintances to slowly becoming friends. Especially in fantasy stories, friendships and actually all relationships are ever-evolving things and I felt like I was missing out on witnessing the evolution of all these relationships between these wonderful characters.

Overall, I liked Into the Fairy Forest. I’m going to give it 3 stars because it was a good read. I would have definitely given it a higher rating if the characters hadn’t felt flat to me. Even if the characters had been flat and their relationships had been described more, I would have given Into the Fairy Forest a higher rating. The well balanced plot was one hundred percent the best part of this book because it set the perfect pace for this story. The ending was also nice because it wasn’t out of character but it sets up the overall arc of the series well. I am looking forward to reading the sequel, Rise of the Hidden Prince!