The Dazzling Heights (The Thousandth Floor #2) by: Katharine McGee

By Toshita Barve July 31, 2020
Beware of the spoilers to The Thousandth Floor that lurk beyond this message... 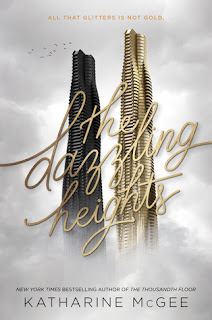 New York City, 2118. In the thousand story tower, five teenagers are hiding dark and dangerous secrets. Leda is haunted by the memories of the past, the worst night of her life. She wants the truth to stay hidden, and the only way to ensure that is to trust her enemy. Rylin’s life suddenly changes when she wins a scholarship to an upper level school. Now she has to face the boy who broke her heart on a daily basis. Avery is tortured by the love of her life because no matter how strong her love is, he is unattainable. She is desperate to be with him, regardless of the cost. Watt wants to put the past behind him and forget what happened that night, but Leda forces him to start hacking again. Will he be able to free himself from Leda? Calliope arrives in New York, a beautiful girl, who knows exactly what buttons to push. A hidden threat lurks, watching their every move, waiting for them to make a mistake, in order to get it’s revenge. At height like this, even the smallest misstep can lead to a devastating fall.
I gave the previous book in this series a slightly negative review but this book has definitely changed my mind about this series. The Dazzling Heights is without a doubt much better than The Thousandth Floor. However, that does not mean that I will not bring up the fact that Katherine McGee went through the trouble of building this amazing futuristic world only to use to stage rich teenager drama. I am still sad and a little angry about it. Just think about the potential uses of a thousand story tower! I think that there is a better use for this world than drama but the drama is so good and juicy that I’m okay with it.
One thing that bothered me a bit was the way this book started off, specifically the prologue. It was too much like the prologue of the first book. The reason it bothered me is that I wasn’t too fond of The Thousandth Floor and starting off the sequel in a similar fashion made me think that the book was going to be similar. Thankfully, this was not the case. This book dived right into the action so I wasn’t worried about it being slow and I knew the characters from the previous book so I did not have to worry about how they were related to one another or feel the need to make a flowchart unlike my need when reading The Thousandth Floor.
I was able to predict a couple things in this book which I couldn’t do in the previous book, but they were all minor things and occurred closer to the beginning than the ending so it wasn’t anything major. Speaking of predicting things, there is no way that I could have called that ending. It came out of left field and confused the heck out of me. It has also made me so excited for the next book because I need to know what happens or more accurately what happened and who did it. That’s all I’m going to say about the ending, if I say anymore all of the spoilers will come spewing out and we definitely do not want that happening.
Let’s turn our attention to the characters for a moment. They frustrated me in this book. They exasperated me with their choices and stubbornness. I am not talking about all of the characters, only two of them. They were so good in the first book and now the two of them are just falling apart and making the wrong choices and it is making me mad! All I want is a happy ending, but the only things that these characters are doing is making everything harder.
I would give this book 3 stars because of the juiciness of the drama and the totally unexpected ending. The frustration towards the characters adds to the story because it was one of the things that kept me reading this book. I wouldn’t recommend this book to anyone due to the fact that The Thousandth Floor is not as good as The Dazzling Heights and in order for this book to make any sense, they would have to read The Thousandth Floor.