By Toshita Barve June 19, 2020
This review was requested by the author. 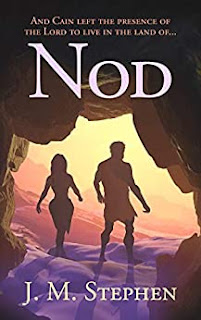 After Cain is banished from Eden and goes to the east to live in Nod, that is the last time Nod is mentioned in the Bible. Where is Nod? Where did the people who inhabit it come from? What did Cain do there? Lailah, Cain’s wife, tells the story of Nod from it’s genesis all the way to Cain joining them. Lailah is the first person to meet Cain outside of his family and her perspective will shed new light on the story of Cain and Abel like never before.
When I was approached by J.M Stephen asking me to read this book, I was a little worried that this book would deal heavily with religion given that it features characters from the Bible. Thankfully Nod does not deal with religion a great deal but someone who knows nothing about the topic will likely be confused. I would have been confused by this book too, if I hadn’t read East of Eden in high school. Anyone who is familiar with the basic story of Adam and Eve as well as the story of Cain and Abel should be fine when reading this book. After all Nod is speculative fiction so knowing the details of the stories is not important because the details are different.
Even though I was apprehensive about reading this book, I liked it. The story as a whole was quite fast paced. I hadn’t expected it to move along so quickly especially because it is dealing with the “first humans ever.” I thought it would take longer for the characters to get organized into a village and work together but it was actually quite quick. While the pacing of the book was wonderful, one thing that put me off was the descriptions in the book. Most of them made sense and I was able to figure out what was being talked about but some of them were really vague. It makes sense that things were vaguely described since these humans are inventing things for the first time and those objects are not going to have the same names that we do for those things. However, if the descriptions had been a little better I would have been less confused. I spent some time re-reading passages and trying to figure out what was being talked about rather than reading the book.
Another thing that confused me while reading this book was the timeline/the time that passed by. I was confused by it because there were no definite identifiers of time throughout the book. Days were mentioned but months or weeks or even a count of the number of days did not exist. Due to this there was a disconnect between the passage of time that I had in my mind and the actual time that passed in the book. While reading I read "Time passed its hands like a thick and sticky paste", which I interpreted as fifteen to twenty days passing by. However, a character who was pregnant had given birth, which means that in reality several months had passed. Given that this is a piece of speculative fiction, it would not have been difficult for J.M. Stephen to include some kind of metric for measuring the passage of time other than days. The lack of a way to measure time led to time in the story feeling distorted rather than feeling natural, especially since very little time passes when I am reading from one chapter to the next.
The ending of this book was pretty interesting because I was not expecting it. After becoming interested and invested in the story, I was truly hoping for a happy ending which was a bad choice because how is the story of Cain and Abel ever going to end happily? That was a mistake on my part but Cain was doing so good, can you blame me for having hope? I am a sucker for a good redemption arc and that’s what I wanted from Nod. The ending left me sad and a bit confused. Even though the ending was confusing, it did stay true to story of Cain and Abel, and the ending fit in with the arc of book as a whole
Overall, I would give this book 3 stars because it was a really engaging story and because the ending did not feel out of place. The only reason that I am not giving it a higher rating is because of the weirdness of how time was dealt with and how it felt distorted. If it hadn’t been for my confusion when it came to the way time is described in this book I can easily see myself giving Nod 4 stars, easy money. The one thing that I will say to anyone who is interested in reading Nod is that they should brush up on or read the story of Adam and Eve as well as the story of Cain and Abel as there is understandably a lot of allusion to these two stories in this book.