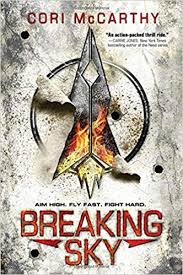 It’s 2048 and the junior Air Force Academy is training only two pilots to fly their experimental “Streaker” jets. Chase Harcourt is one of those two pilots. With call sign like “Nyx,” it is no surprise that Chase is as tough as they come. She is also impulsive and has lightning fast reflexes. But underneath that tough exterior, she holds a lot of loneliness and pain from her past, as well as a dark secret about her father. Not that anyone tries to get to know her, all they care about is how Chase does on the Streaker trials that are coming up. If she aces them, it proves the prototype jet can knock the enemy out of the air. Everything is not as it seems though, as Chase unearths a huge military secret. There is a third Streaker jet and a third pilot. The pilot, Tristan, can step toe to toe with Chase both in the air and on the ground. With war imminent, she is going to have to put her life in the hands of her competition, if she wants to save the world.

Breaking Sky was a roller coaster that I got on and it was thrilling. The action went on and on, seemingly never ending. Considering that Breaking Sky is a dystopian story, it doesn’t overpower the reader with only physical action like some dystopias tend to do. Cori McCarthy puts in touches of emotional action as well as character development for all the characters instead of focusing solely on the main character making the action all the more exciting.

The whole premise of this book was a whole new idea to me. I should mention that I have not watched Top Gun (I do plan on watching it one day). I had never read a dystopia about pilots in a super secret military program before reading this book. I have read dystopias, books about pilots, books about super secret programs of the government/military, and even books about such secret programs planning to overthrow the government/military, but never this exciting and new combination. I love the way that this book combined all of these things because what came out is absolutely amazing.

The character development in Breaking Sky is subtle and can be missed if you get caught up in the action of the story but it will eventually smack you in the face. With that being said I really liked this subtlety of it because I was not paying much attention to it. I was too busy focusing on the action and trying to figure out what happens next that the defining moment of character development literally surprised me in scene that I thought was an escalation of the plot. I should have realized it earlier given that it is written in first person. Having in the book in first person really brought out the emotional journey which I was able to trace when the realization struck me. It also helped me connect with Chase and empathize with her because she isn’t afraid of expressing her emotions, whether they are a part of the story’s plot or just her narration.

The thrilling action, the uniqueness of the story, Chase’s emotional narrative, and the character development made reading this book a wonderful experience. I would give it 5 stars without a second thought. It’s a great read but I can’t tell you if you’ll like it or not because of how unique it is.

By Toshita Barve January 03, 2020
Peter Laufer used to believe that butterflies and flowers are an analogy for tranquility. He needed an answer for a persistent question and as a journalist he was tired of war and the horrible things in the world, so on a whim Peter Laufer said he was going to write about butterflies. Little did he know that an American lady living in Nicaragua would take him seriously and invite him to her little piece of land to begin exploring the world of butterflies. Peter Laufer had no idea what a treacherous world he was about to step into. The Dangerous World of Butterflies is this story of exploration. Peter Laufer discovers collectors, criminals, and cops all obsessed with these tiny and miraculous creatures. He explores the roles of butterflies in history and different cultures’ mythology and art. He stumbles into stories of organized crime, ecological devastation, and a growing list of endangered butterflies. Your garden, the creatures in it, and the world will not look the same to you af…
Post a Comment
Read more

By Toshita Barve February 06, 2014
Defiance is the story of Rachel, the daughter of Baalbodem’s most skilled tracker. Jared, Rachel’s father has been on a mission for three months. On the last day of the three months Jared is declared dead by the leader of the city, the Commander. Rachel is assigned a new Protector, Logan. Logan is Jared’s apprentice and also the boy who was loved by Rachel two years ago. Rachel believes that her father is still alive. She formulates a plan with the help of Logan to go out of the city and and search for her father. Will she find her father or will she uncover something far bigger?

My first impression of Defiance was, “This book is dystopian.” But as I got into it a bit more I realized it was fantasy. With a title like Defiance it sounds like a dystopian novel. But it wasn’t meant to be. The book was good but I expected a bit more on the Cursed One. I would have liked a better explanation of the Cursed One. The only thing I got from it was that it was a dragon-like creature that lived un…
2 comments
Read more