By Toshita Barve April 30, 2021
This review was requested by the author. 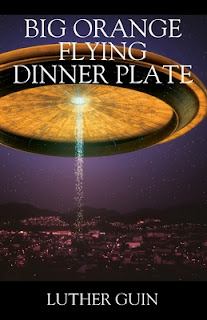 Charlie Brady has never even thought of the possibility of extraterrestrial life being real. His life had more pressing matters like the Great War and how to survive. That is until one day, one of those very lifeforms physically took him off the planet. The aliens took him several times adding fear about future abductions to his very terrestrial concerns of outrunning the mob and falling in love. Will Charlie be able to survive it all?

When I received the message to review Big Orange Flying Dinner Plate, I happily agreed to read and review it. I haven’t read many books about alien abductions so I wanted to take a shot at reading this book. Since I haven’t read a lot about alien abductions and since it is a topic that can be interpreted very differently by every single person, I did not have any expectations as I went into this book. With that being said, I didn’t enjoy it. The narrative style of the book was weird and there were moments where the book dragged and it felt like it would never end. If I was to compare it to the only other alien abduction book that comes to mind, Slaughterhouse Five, I would say that Slaughterhouse Five was better but not by too much of a margin.

Let’s break it down: The narrative style. This book is written in first person as if Charlie is keeping a diary or journal or everything he has been through, which is a great way to present this story. The problem that I had with the way the story was being told is that there wasn’t enough description for me. I found the narrative style to be very bullet pointed. It was very, “I did this then I did that. This happened. So I did xyz.” I understand that no one writes in their journal to make it interesting and that a raw unedited journal would probably read exactly as I described with detailed descriptions of some mundane thing in their life… At least that’s what my journal would be like… Anyway, the point I’m trying to make is that given that this is a published book, the story should have been more detailed. I have read books that manage to straddle the line of having good descriptions but are meant to be written by the main character of the book. An example of this is The Outsiders. Thus I don’t feel like I am asking for too much when I want there to be less bullet points and more descriptions. When I did actually get descriptions of what was happening, they sometimes did not make any sense. An example of this is Charlie being frozen, he is unable to move his arms or legs and yet he somehow manages to roll over? If a person’s arms and legs are frozen they should not be able to move at all, forget about being able to roll over. Additionally, the book wasn’t written in chronological order but I thought it was written chronologically, which I suddenly realized wasn’t the case. It threw me off but the switches in time were not clear enough in the story.

On the flip side of this, the descriptions in the later part of the book were long and detailed but about things that I didn’t really care about. When Charlie was on the ship itself, there were long winded and thorough descriptions of all sorts of technology that was on the ship. But as I was reading through them I was just bored. The technology wasn’t that interesting to me especially when it wasn’t paired with much of a plot. It was boring to read about Charlie going on and on about some technology on the ship which he was fascinated with. However, apart from learning about the technology, there was nothing else happening and it felt like no matter how many times I flipped the pages, the story just wasn’t moving forward.

One of the things that caused me to not enjoy this book was the climax/ending of the story. I’ll talk about the climax first. It wasn’t exciting enough. I never got the feeling that I should be nervous for the characters, I never felt like things were building to a point where they would explode. A good climax starts building and you can feel it as you read. You inadvertently start to read faster and there’s a feeling of anticipation as the tension builds. I never felt any of that. In addition to the climax not being exciting enough, the ending was abrupt. There were a couple of loose ends that never got tied up with regards to ending, especially since they were mentioned at the beginning of the book. I can’t go into more detail without actually spoiling the book but something was mentioned in the beginning of the book which should have made a reappearance at the end but it didn’t.

There were also many errors in this book. I understand that it is ridiculous to expect the book to be perfect but more than 2 or 3 errors is too much in my opinion. Additionally, if the errors were just basic typos, I wouldn’t even have said anything but they were grammatical and editing errors. For example, a sentence had Mr. Watson, but there isn’t a character named Mr. Watson. I spent a while trying to figure out who Mr. Watson was but as I read on I realized that it was supposed to be Mr. Watkins, who is actually a character in the book. There were also other grammatical errors such as “easier to bare” when it should be easier to bear. Several times, Charlie said that he lied in bed when it should be he lay or laid in bed. A couple of these errors wouldn’t have bothered me but having many of them just annoyed me a little.

I chose to give Big Orange Flying Dinner Plate 1 star because I did not like this book. The plot did not keep me engaged, the climax wasn’t very climactic, and the ending was abrupt and didn’t cover everything that it should have. In addition to that the book was either not descriptive enough or it was descriptive to the point that it bored me. There were also plenty of grammatical and descriptive errors in the book which further turned me off. Finally, the main reason that I did not enjoy this book was due to the narrative style. It didn’t flow well enough and always felt like a bullet point version of what happened to Charlie. I think this book has the potential to be a really good book with a little more editing and polishing.