The Women in White by: Fred Tippett II

This review was requested by the author. 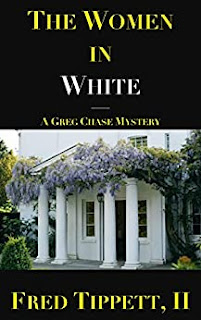 Greg Chase is the youngest police consultant working with the NYPD. As a sixteen year old with an eidetic memory and a knack for solving puzzles, there’s no other job that suits him better. Forced to leave his job after a case gone wrong and the death of a suspect, Greg returns to school only to be drawn into the mystery that is the new girl, Mel Locket. She’s a loner, but Greg quickly makes a connection with her. As the two grow closer, he learns that Mel might have murdered her former classmate and best friend. Convinced that Mel is innocent, Greg takes it upon himself to clear her name. But everyone around him, his family, the police, her therapist, and even her mother warn him that she’s violent and unstable. But did Mel really kill her friend?

I love a good murder mystery and I love to watch crime TV shows so I was very much looking forward to reading The Women in White. I am so glad that I agreed to read it because I had a lot of fun reading this book. I think it was the first book in quite a long time that I had a very hard time putting down. The plot of this book just sucked me in and would not let go. The beginning of the book was a little slower so it did take a few chapters but around chapter 5 or 6 I was totally invested in the story and I basically read the rest of the book in one sitting. Since this book is a mystery, the timings at which new information is revealed is the key to having a gripping book and the author nailed it. There was never a moment where I felt like there was no progress being made or that the story had come to some sort of standstill. The plot of this book was perfect but there wasn’t a lot of foreshadowing. I would have enjoyed reading this book more if there had been moments that I could look back at after a new piece of information was revealed and see that it was actually a clue leading to this new evidence. Not only would it have made the book more interesting to read, it would have also made me focus more on the story and get more invested because I would be on the lookout for more clues.

The characters in this book were very interesting and my thoughts about them, especially Greg, are a little oxymoronic. On the one hand I love Greg. He’s smart, witty, and extremely brave. He honestly reminded me a little bit of all the sassy characters that I love. He’s basically a young Shawn Spencer minus the fake psychic antics. On the other hand, he just didn’t act like a teenager. Everytime that he talked to anyone, he sounded like he was in his 20s. His thought processes weren’t those of a 16 year old at all. Now you may be thinking, “Of course they weren't, he's a consultant to the police and so he has to mature compared to other people his age.” I would totally agree with that statement but even then, his conversations with his friends shouldn’t have had that feel or for that matter when speaking with his mother he still didn’t feel like a teen. As for the other characters, especially Greg’s friends I felt the same thing. They all acted like adults even when interacting with other adults.

Which leads me to my next issue with this book: the conversations. There are two main things that irked me about the way that the conversations were written. For one, they just didn’t feel realistic, in any way. When it came to dialogue between Greg and his friends the jokes and some of the terms felt really forced. In the conversations between Greg and his mother, she consistently called him “son.” I would have understood it if it had been a one time thing or if his father called him son but mother calling him son just sounded weird. In fact, I think she called Greg “son” more frequently than her actually calling him “Greg.” The other thing I didn’t like about the dialogue in this book was that there were so many words, so many, that were italicized. I flipped to a random page and counted the number of italicized words in the dialogue, there were 22. That’s right twenty-two. I have nothing against italicized words but when there are so many words that have been emphasized, that emphasis and italicization begins to lose meaning. By the end of the book, I was genuinely not even perceiving the italicized words as benign different from the normal ones because I had seen so many of them that they had become meaningless. It’s a small detail but one that caught my attention and quite frankly annoyed me.

Apart from the conversations, there was one more problem that I had with this book. There was one large and glaring plot hole that did not make any sense to me. Let me lay out in the simplest of terms. Greg is a police consultant. He works with the police on investigations to solve them. Generally police are not open to sharing the nitty-gritty details of a case with other people to stop rumors from spreading and such. However, Greg was consistently and very openly discussing the details of the case as well as hunches that he had about the case with not only his friends but with Mel who is actually involved in the case that he is investigating. That makes no sense. It is a given that investigators don’t discuss open cases and Greg is out here sharing who thinks committed the crime! It just made me mad to read that because it makes absolutely zero sense.

Apart from those two main issues, I really enjoyed this book. As I mentioned earlier, the plot is amazing. It shouldn’t be very surprising then that the climax of this story was also amazing. Every mystery needs its twists and these twists were awesome. I couldn't have even remotely called them before they happened. I love a good twist and The Women in White certainly delivered in that department. The ending of the book was good as well however, I do wish that it had been a little more detailed and longer. The ending did feel a little abrupt to me. I was reading the climax and then two to three pages later I was suddenly reading the epilogue. I just wanted a little more in between the climax and the epilogue.

Overall, I am going to give The Women in White, 4 stars. I was honestly debating about whether I should give it 3 or 4 stars and the reason that I ultimately chose 4 stars was due to how strong and well crafted the plot of this book was. I do have several issues with this book, the plot hole and the weird characterizations but at the end of the day, I was hooked to the story. Not only was I hooked but the story actually caught me off guard and surprised me with its twists so I think that makes up for the problems that I had with this book. I am not going to specifically recommend this to anyone but if you like mysteries and are willing to give it a shot, go for it!